The Ute people are the oldest residents of Colorado, inhabiting the mountains and vast areas of Colorado, Utah, Wyoming, Eastern Nevada, Northern New Mexico and Arizona.  According to tribal history handed down from generation to generation, our people lived here since the beginning of time.  Today, the Mouache and Caputa bands comprise the Southern Ute Tribe and are headquartered at Ignacio, Colorado.

You can spend an entire afternoon at the Southern Ute Cultural Center and Museum exploring Ute history, from early rock art and nomadic livelihoods to learning how modern Utes have transformed themselves into one of the most industrious tribes in America.  A guided tour is the best way to learn the cultural symbolism behind Johnpaul Jones’ architectural design, the significance of key pieces in the museum’s collection including the Ghost Dance Dress, and outdoor experiences accessible from the Museum.

The museum is family-friendly with many interactive exhibits for children.  Don’t forget to stop at the Museum Store before you leave for artwork and jewelry made by Southern Ute and other tribal members as well as books, maps, and other keepsakes.  You won’t leave empty-handed!

While in the area, make sure to visit Chimney Rock National Monument, San Juan National Forest and the many other fantastic attractions in the Four Corners region.  Call 970-563-9583 to discuss tour options, prices, and available dates, or email tours@succm.org. 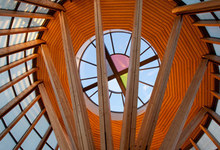