On the banks of the Mississippi River in America’s heartland lies the vestiges of a once great civilization. Starting around A.D. 700, the Mississippians made their home across from present-day St. Louis and built a city spanning six miles, home to tens of thousands of American Indians.

Considered the largest and most complex archeological site north of pre-Columbian sites of Mexico, this UNESCO World Heritage Site has much to see. The most prominent features are the earthen mounds; 80 of 120 can been seen today varying in function and size. The largest, Monks Mound, rises 30 meters and covers nearly 14 acres and has a view of the St. Louis Arch from the top! There is also an interpretive center, guided tours, and more than six miles of trails to explore around the site.

Active archaeological digs continue to uncover what life was like for Mississippians. We know they arranged their homes in rows punctuated by plazas and tended their fields in the city’s surrounds. One of the mysteries that still persists is what happened to the people of Cahokia; the city was abandoned by 1400 A.D., and archeologists have yet to determine their fate. 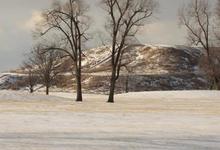