History comes alive on this journey, as the great Lakota spiritual leader Sitting Bull lived and died here; Meriwether Lewis and William Clark stopped 14 times; famous mountain men such as Jim Bridger and Jedediah Smith passed through; and it is documented as the final resting place of Lewis and Clark’s guide, Sakakawea.

Landscapes along the way include mixed-grass prairies and rolling hills that end in limestone cliffs lining the river in many places. An abundance of wildlife, including prairie dogs, pronghorn and deer can be spotted as you travel – not to mention bison and elk herds that are maintained by several tribes. 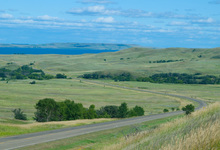