Take to the open road to experience the history, culture and rugged outdoor adventure that Northern Nevada Indian Territory has to offer.

On a four-day circuit departing from Reno, road trippers will learn about the Washoe, Paiute and Shoshone cultures by visiting museums and historic sites, traversing scenic byways and exploring native lands through the great outdoors. For a more detailed itinerary with suggested accommodations, visit Nevada’s Indian Territory website. 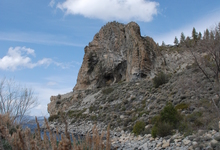