Located in Alaska on Prince of Wales Island, Kasaan is the northernmost of the Haida villages. At the end of the 1800s, residents moved from Gasa’aan (“pretty town”), now called “Old Kasaan” on Skowl Arm to the present location of Kasaan .

In the 1930s, Náay I’waans, “the Great House”, the last remaining traditional Haida building in the United States, was renovated for the first time and a totem park was created nearby through relocating eight original totems from Old Kasaan.

The original house had four carved, monumental poles, all of which survive today. The oldest came from an earlier clan-house and was commissioned or carved by a previous hereditary leader sometime before 1880. The undated masterwork still serves as the Head House Totem and faces the front door with its back against the far wall.

The building gets the nickname Chief Son-i-Hat “Whale House” from two ornately carved twin house posts, one on each side of the Head House Totem. These “Gáats”, house posts supporting the roof, depict images of the Wasco story.

The tour begins with a uniquely beautiful walk through the woods but, not to worry, it’s a very level 2/3 of a mile each way. During the tour, you will learn about many aspects of Haida life and culture. Concluding the tour, visit the Carving Shed to see the latest projects like the 19 feet long Haida canoe completed in October 2017. 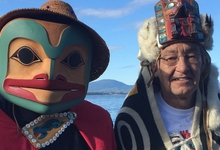