Learn about the ancient roots of the Las Vegas area by hitting the road and exploring the unique history, rich culture, and wondrous geology of Southern Nevada. 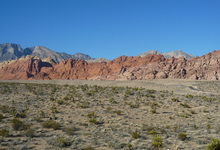