On June 15, 1877, the Nez Perce (Nimíipuu) fled their homelands in search of safety to escape the violent engagements with the United States Army and find a more peaceful existence living according to their traditions. Pursued by the military, which included the 7th Infantry and 7th Cavalry of the U.S. Army, 750 Nez Perce, including 250 warriors, women, children and elders, and approximately 2,000 horses, set off near Wallowa Lake in eastern Oregon and traveled a circuitous 1,170 miles over five months through Idaho, Wyoming and Montana. The Tribe planned to ally with the Crow for security, but when that failed, they headed toward the Canadian border.

Along the way, the Nez Perce warriors fought the military and citizen volunteers valiantly across a series of battles. But starved and exhausted from the journey and persistent clashes, the brave Chief Joseph surrendered following a battle near Bears Paw Mountains in Montana, less than 40 miles from the Canadian border. Led by Chief White Bird, nearly 300 Nez Perce men, women and children managed to escape the battle at Bears Paw and make their way into Canada where, for a time, they joined Sitting Bull and the Lakota near Fort Walsh. Following the surrender, the Nez Perce were sent to Fort Leavenworth, Kansas, and eventually to reservations in Oklahoma, where deplorable conditions led to the death of most babies born on the Indian Territory. Today, the trail represents a sacred journey, connecting the surviving Nez Perces to the past, present and future. 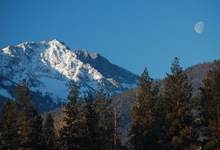