Following the Indian Removal Act of 1830, members of tribes with ancestral homelands in the Deep South were illegally forced to move to Indian Territory west of the Mississippi River and forfeit their land to white settlers. Members of Cherokee, Muscogee, Seminole, Chickasaw and Choctaw Nations, who chose not to assimilate or flee, were forced to travel thousands of miles to new designated areas. By 1837, 46,000 American Indians from the southeast had been removed from their lands.

The Cherokee removal was one of the last, and it is estimated that 3,000–4,000 of the 16,500 Cherokee across the 17 detachments died during the passage, earning it the name Trail of Tears. Four detachments of Cherokees traveled by river, while the rest took one of several overland routes. Drought, road conditions, illness, starvation and the harsh winter in southern Illinois meant death was an everyday occurrence. Today, the Trail of Tears National Historic Trail includes more than 5,000 miles of trail across nine states (N.C., Ga., Tenn., Ill., Mo., Ala., Ky., Ark. and Okla.) and marks the forced removal of Cherokee people. 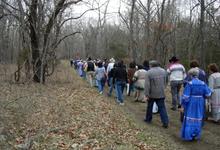