Route 66 was an officially commissioned highway from 1926 to 1985. During its lifetime, the road guided travelers through the lands of more than 25 tribal nations. It was a give and take relationship between the asphalt and the American Indian people—from the physical intrusion of the road on American Indian lands to the new commerce the road introduced.

American Indian stereotypes were propagated and used as a major lure for tourists on this “Mother Road” of American highways and the evidence lingers. Faded billboards, rusty metal tipis and concrete ‘wigwams’ beckon from the roadside, evidence not of the tribe they were meant to represent, but of tourism marketing savvy. Today, the road can help break down these stereotypes as tribes actively share their distinct cultures and histories. American Indians and Route 66 was made possible through consultation and participation of many of the tribes along the route.

Route 66 begins in Grant Park, Chicago—or ends there—depending on which direction you’re traveling. At the intersection of Jackson and Michigan Avenues, a sign declares the “End of Historic Route 66." But according to statistics, most people begin the journey going west, a journey that terminates near the Santa Monica Pier at the intersection of Santa Monica Boulevard and Ocean Avenue in Santa Monica, California.

Whichever way you head, this iconic highway cuts its way across more than 2,400 miles of the United States.  More than half of Route 66 lies in Indian Country—roughly 1,372 miles.  American Indians & Route 66 seeks to introduce the tribes living along the route. We seek to inform and to point the way to genuine cultural experiences all along Route 66—from Chicago to LA. 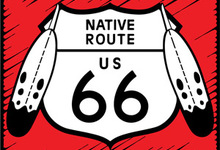 The Miami Tribe of Oklahoma

The Quapaw Tribe of Oklahoma